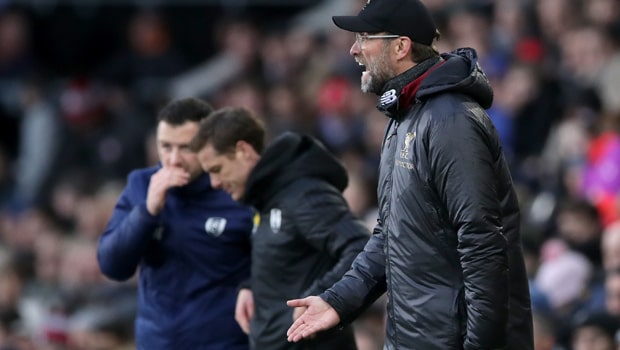 Jurgen Klopp insists Liverpool got a ‘sensational result’ at Fulham and that they must keep on winning because Premier League title rivals Manchester City don’t look like dropping many points.

The Reds manager was relieved to see James Milner convert a penalty to give his side a vital win against relegation-threatened Fulham on Sunday that puts Liverpool, who are 3.20 to win the title, back on top for now.

Klopp’s men head into the international break two points clear of City, the 1.33 favourites, who have a game in hand.

But it could have been so different had Liverpool not found a winner in a match which looked destined to see them slip up when former striker Ryan Babel found Fulham a late equaliser.

In-form Sadio Mane had given Liverpool a half-time lead, but Babel capitalised on miscommunication between Virgil van Dijk and Alisson to throw a spanner in the works.

Victory was ultimately secured in the 81st minute when Mane earned a penalty following a rash challenge by the hosts’ goalkeeper Sergio Rico, and Milner scored from the spot. “We want to stay in the race. That’s what we did,” said Liverpool boss Klopp.

“Nothing is decided, but we can make sure we stay in the race. “(First is) the best position you can be in. City don’t look as if they drop a lot of points, so we have to win, to win and to win.

Now they have a game in hand but it was very important we won. We were really all very happy. You could see in our reaction.

“I didn’t see us panic. I liked how we reacted. The penalty doesn’t say we are sensational. Five or 10 minutes before the equaliser, we had so many little mistakes.

“We controlled the game completely, and then we gave Fulham the ball and the crowd woke up. But we had a very intense week, going to Munich, coming back, travelling to London, so I’m completely fine. Average game, sensational result.”