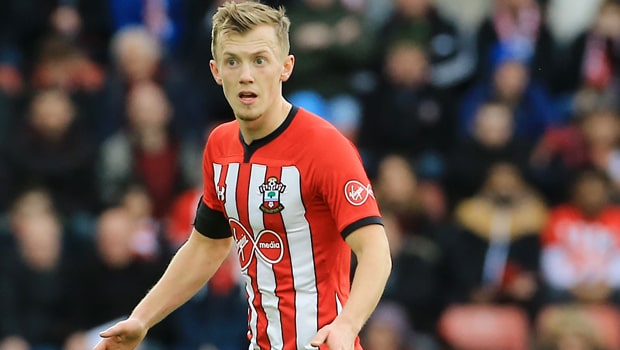 England have called up Southampton midfielder James Ward-Prowse for this month’s Euro 2020 qualifiers against the Czech Republic and Montenegro after a spate of injuries.

The 24-year-old will join up with the squad on Monday after the withdrawals of Manchester City defender John Stones, City midfielder Fabian Delph and Chelsea’s Ruben Loftus-Cheek.

Ward-Prowse has not played for England since his debut as a late substitute in a 1-0 defeat away to Germany two years ago.

England head coach Gareth Southgate said his midfield is ‘a difficult balance’ after leaving Ward-Prowse out of his original squad last week.

The Southampton star had put himself in serious contention to add to his one cap with his recent performances.

The six goals he has scored in his last nine games include stunning free-kicks against Manchester United and Tottenham Hotspur. But after he omitted him last Wednesday, Southgate said: “We love Prowsey, I have been accused of being father of Prowsey over the years.

“This most recent spell is his best since we capped him before, he is a world class deliverer of set-plays. “He has only recently got back into the team at Southampton.

“Our midfield is a difficult balance, four months on from our last game you could say that Delph isn’t playing for Man City but he was our best player against Croatia.”

England will be hot favourites to win both Euro 2020 qualifiers and are currently 1.33 for the match at Wembley against the Czechs on Friday.

Centre-back Stones missed Manchester City’s FA Cup win over Swansea on Saturday with a groin injury, while Delph was substituted after 57 minutes of the match.

Chelsea’s Loftus-Cheek came on as a 65th-minute substitute in his side’s 2-0 Premier League defeat at Everton on Sunday.