Sean Dyche not thinking of Europe yet 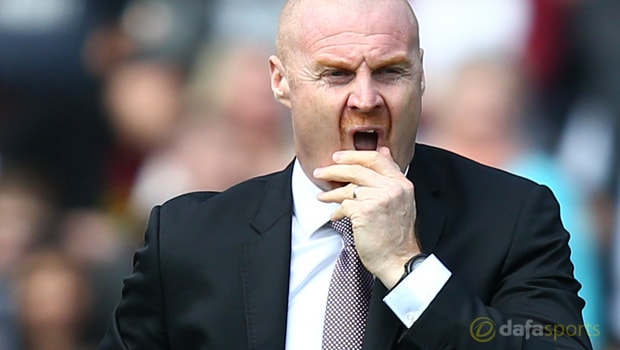 Sean Dyche won’t allow his Burnley players to start dreaming of European football just yet, despite a big win over Leicester at Turf Moor.

The Clarets, currently seventh, overcame eighth-placed Leicester 2-1 courtesy of early goals from Chris Wood and Kevin Long on Saturday, with Jamie Vardy’s second-half strike not able to start a successful comeback from the former champions.

It means Burnley are now nine points clear of the Foxes with only five games each left to play. Taking seventh spot this season will be enough to qualify for the Europa League unless Southampton win the FA Cup.

The relegation-threatened Saints face Chelsea in the last-four next weekend, with Manchester United and Tottenham squaring off in the other semi-final.

It has been an amazing season for Burnley to this point, but Dyche says the most important thing they can do is finish it off strongly and see where that takes them.

“Our story is still about getting as many points as we can get,” said Dyche.

“Who knows what it will bring but we will just wait and see.”

Should they complete the journey and hold onto seventh spot, it would be the Clarets first adventure into Europe since the 1966/67 Inter-Cities Fairs Cup.

The win over Leicester was also the first time Burnley have won five consecutive matches in the top flight since November 1968. With Leicester applying the pressure late on, Dyche praised ‘outstanding’ goalkeeper Nick Pope after he made some superb saves to protect the three points.

The Burnley boss feels his stopper is bang in contention for a place in England’s World Cup squad this summer.

“Our goalkeeper was outstanding,” he told Sky Sports.

“But he [Pope] has had a very good season, a very strong season.” Burnley are 3.00 to continue their winning ways at Stoke next Sunday. The home side are 2.50 while the draw is 3.25.