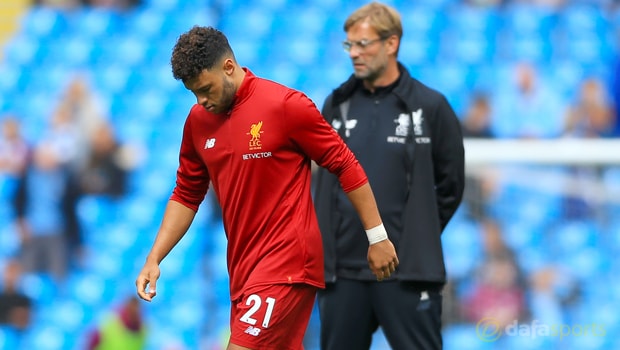 The England international decided to leave the Emirates on transfer deadline day, with Liverpool paying £40million to bring him to Anfield.

He has only made three substitute appearances so far, playing 57 minutes of action in the games against Manchester City, Sevilla and Burnley.

While he could get a run out in the Carabao Cup against Leicester City on Tuesday, Klopp insists he is happy to use a patient approach with the former Southampton youngster.

The likes of Jordan Henderson and Emre Can have been in fine form this season so far and the former Borussia Dortmund coach is confident Oxlade-Chamberlain will soon find his feet.

He told Sky Sports: “We are working on it. We are obviously together with him and the analysts to show him how we want to play him in this position and in that position.

“So there is work to do but there is no rush. That is how it is but it is really good that he is here.

“Of course it is always better – and next year it will be like this – if a new player comes in for the [start of] the season at least, if not for the pre-season. That would be even better.

“When the season starts, now we are really in this three-games-per-week rhythm and during the international break he was with the national team. So it is not easy and it takes time.

“But already at the weekend [against Burnley], he came on in a difficult situation and he did really well.

“He’s at a perfect age and is still able to make big steps.”