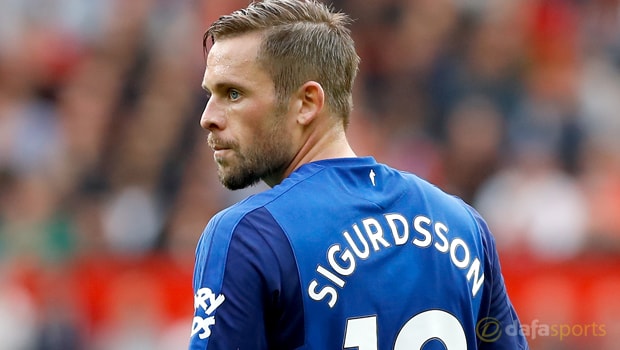 Gylfi Sigurdsson is sure Everton are good enough to turn things around following four consecutive defeats under boss Ronald Koeman.

The former Southampton coach is under pressure at Goodison Park after their recent results saw them slip to 18th in the Premier League.

Three league defeats have hampered their progress, while the Toffees were also beaten 3-0 in the Europa League by Atalanta.

On Sunday they were comfortably beaten 4-0 by Manchester United but Sigurdsson insists there were positives to take from the game.

He told the Everton website: “Yes, it is hard to say that after a 4-0 loss but we will stay together, stay positive and keep working.

“A lot of us have been in this position before where things are not going your way.

It does not look too good at the moment but I know we are more than good enough to turn this around.

“I think we performed better up to United’s second goal,” he added.

“We had a couple of chances but I think towards the end, they got their best chances after our mistakes.

“It is just those fine margins. We have to take our chances when we get them and it will be a different game.

“Even though we conceded four goals I think we were more solid as a team and harder to break down. But we are going to have to improve for the next few games.”

The Toffees are next in action on Wednesday in the Carabao Cup, with Sunderland the visitors to Goodison Park.