Emre Can admits Man City are a ‘step ahead’ 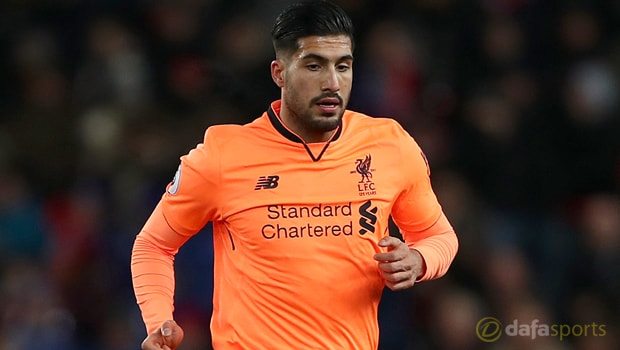 Liverpool midfielder Emre Can admits his side, along with everyone else, remain a step behind Premier League leaders Manchester City for now.

The German suggests that Pep Guardiola’s side could win the title “at a very early stage” given their tremendous early-season form.

After their impressive midweek 3-0 win at Stoke, Liverpool have gone five consecutive league games without a loss.

They are still 14 points behind City, though, who have won 12 on the spin, and Can says the leaders won’t be caught if they keep finding late winning goals.

“That they left it late again [in Wednesday’s win over Southampton], totally fits City right now,” Can said. “City are just a step ahead.

“Let’s see how long the run will last. Maybe forever, maybe they will have a time when they falter.

Should they keep it up like that, they will win the title at a very early stage.”

Ahead of Saturday’s trip to Brighton, Liverpool sit two points behind fourth-placed Arsenal in the Premier League and Can is relatively pleased with their progress, though he says they can do better.

“We could do better, but we are still in a good position,” Can said.

“Our goal is to reach the top four and again qualify for the Champions League.”

Can, 23, made his 100th Premier League appearance for Liverpool at Stoke.

His contract will expire in June 2018 and he has been linked with the likes of Juventus, Bayern Munich and Borussia Dortmund but Can says he is still focused on Liverpool.

He expects more talks on his future to take place soon. “Of course, I talk to Liverpool,” Can told Spox.

“Let’s see what happens. My focus is on Liverpool only right now, and my agent takes care of the rest.”