Claude Puel: We must stay grounded 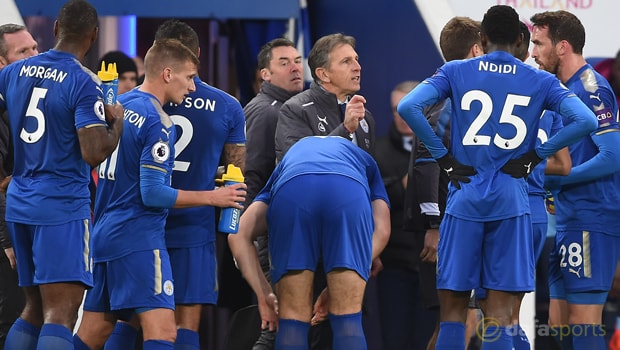 Leicester City boss Claude Puel has warned his players they cannot get carried away after their strong start under his stewardship as they prepare to take on in-form Burnley this weekend.

The Foxes made a big statement on Tuesday night as they moved up to ninth place in the Premier League table after a 2-1 win over Tottenham.

Goals from Jamie Vardy and Riyad Mahrez were the difference as Leicester showed glimpses of their best form in the win at the King Power Stadium.

Leicester have only lost one game since Puel took charge at the end of October, but the former Southampton boss insists that means nothing at this stage.

While he is pleased with his team, the Frenchman admits Burnley will pose a serious test on Saturday and he has urged his troops to not look too far ahead.

He told reporters: “Be careful about this. If we watch Burnley, the table doesn’t lie.

I think they are sixth, it is a fantastic season for them. They have confidence and are a strong team.

“They are not just physical, they start with the ball and try to play good football and have had good results away from home. It’s a big challenge for us but also for them.

“Southampton also deserved another result (against Manchester City), every game is difficult in the Premier League and the quality on the pitch of Burnley will be a strong challenge for us.

“Now we are ninth but it’s not important for the moment. I don’t know where we can finish, the most important thing is to continue the work.”

Leicester are the favourites for Saturday’s clash and you can now back Jamie Vardy to score two or more goals at odds of 8.00.