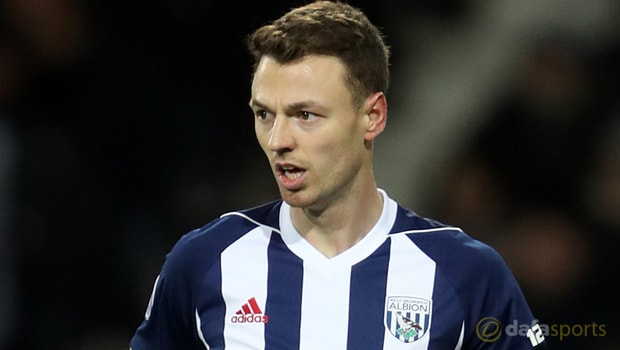 New West Bromwich Albion manager Alan Pardew has revealed he will hold talks with defender Jonny Evans as he tries to clarify his plans ahead of the January transfer window.

The Northern Ireland international was linked with a number of clubs in the summer, but he stayed at the Hawthorns after the Baggies held firm.

Arsenal, Manchester City and Leicester all failed to match West Brom’s valuation but reports claim he could move on in the coming weeks when the window reopens.

West Brom plan to offer fresh terms to Evans and Pardew is hoping their talks can lead to a positive outcome.

“I think the assurance I need is probably from Jonny more than anybody and I haven’t met him yet,” he said.

“I’m looking forward to seeing him. I think he’s a fabulous player and very important for the club so I will have a good old discussion with him.”

Evans has a contract until 2019 after joining from Manchester United for £6m in 2015 and is set to captain the side during Saturday’s clash with Crystal Palace.

West Brom are 2.50 favourites for the game, with the draw 3.20, while Palace are priced 3.10 to win on their trip to the West Midlands.

Pardew also revealed that he will work closely with Baggies sporting director Nicky Hammond, who he knows from their time together at Reading, as the duo try to strengthen the squad in the January window.

He added: “I think it is important you have that trust. He is not going to say to me, ‘Go and buy some £25m Argentinian’ when we have not got the money.

“He is going to tell me the market, where we are, our options. We might have a problem with this player, we might need to address it if we move on.

You have some clarity and I don’t think anyone will get in the way of that. That is important.”