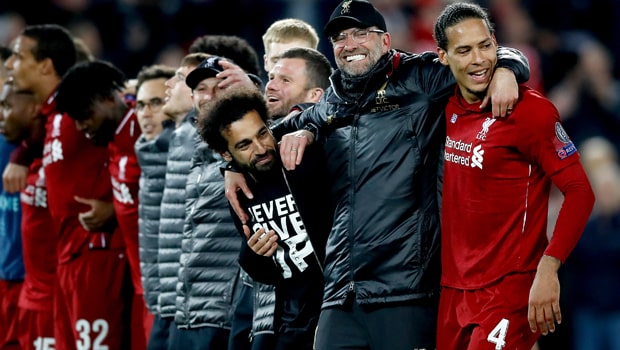 Liverpool defender Virgil van Dijk says his team have the capacity to improve further despite an outstanding campaign this season.

The Reds are preparing for their second consecutive Champions League final in Madrid on June 1 after sensationally overcoming Barcelona 4-0 following a 3-0 deficit from the first leg.

They managed that feat without Mo Salah and Roberto Firmino, with the likes of Divock Origi, and Xherdan Shaqiri stepping up to the plate.

Jurgen Klopp’s side also have an outside chance of winning the Premier League on Sunday though have to rely on Manchester City slipping up away to Brighton on the last day in order to have any chance.

Despite having not yet won a trophy this season, van Dijk is confident this is just the start for the Reds, and says they are not far off having the same fear factor as the great Liverpool team of the 1970s and 80s, who dominated both domestically and in Europe.

“That’s something we work towards,” he said, on re-establishing Liverpool as a dominant force.

“I feel that (Manchester) City already have that bit of status because they have been dominating last year so much. “Hopefully we can keep going and make it very difficult for any team in the world.

“We have a great age group. Between 20 and 27, 28, so hopefully we can do it all together for the next couple of years at least and grow as a team and hopefully get a lot of success.”

Liverpool go in to Sunday as outsiders to lift the Premier League at 6.50 with Manchester City at 1.10.

It makes for better reading in the Champions League final against Tottenham though with the Reds quoted 2.00 and Spurs currently priced 3.75.