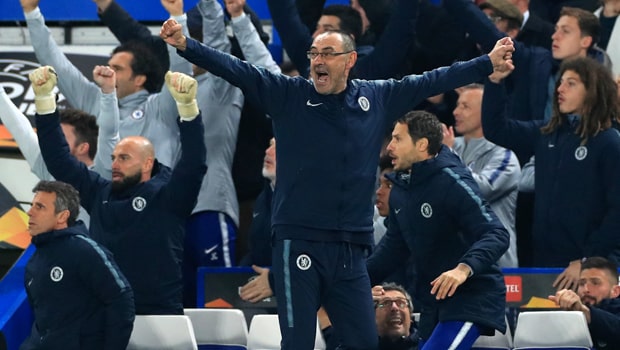 Maurizio Sarri says he was pleased with his team after Chelsea narrowly overcame Frankfurt in a penalty shootout to go through to the Europa League final.

The Blues entered their fixture against the Bundesliga opponents with the game at 1-1 following the first leg at the Commerzbank Arena, and were fancied to go through to the final in Baku.

Ruben Loftus Cheek got the opening goal on the night midway through the first half, before highly-rated Serbia forward Luka Jovic, who has been linked with several clubs, including Real Madrid, found the equaliser early in the second half.

The rest of the game seemed like de ja vu for Chelsea as they struggled to break down a resilient defence as the match ran on into extra time.

They thought they had won it when Cesar Azpilicueta netted late on but his goal was ruled out for a handball. Penalty kicks were required and with Frankfurt having missed their last spot kick, responsibility was placed on Eden Hazard to step up and score the winner and the Belgium winger made no mistake.

It sets up an all-English final with Arsenal in Baku on May 29, with it being the first time ever only one country has represented clubs in both major European finals.

Sarri said it was made difficult by their opponents but ultimately says Chelsea deserve a trophy to cap off a tumultuous season.

“It was clear we were not able to score the second goal in the first half, the match was difficult. Also because, if you are not very, very compact on the pitch, they are dangerous,” the Italian told reporters.

“We were not able to score the second goal in the first half and were in trouble in the first part of the second half. We did better after that and, in extra-time, we were really very tired. Also the opponents were very tired. I think it was a wonderful match.

“In our opinion, our group deserves to win. We were in trouble three months ago and, here in England, if you’re in trouble the level of opponents is very high and it’s not easy to overcome difficulties. We were able to do it. So now we deserve to win a trophy.”

Chelsea are the favourites to lift the Europa League at 1.73 with Arsenal priced at 2.10.