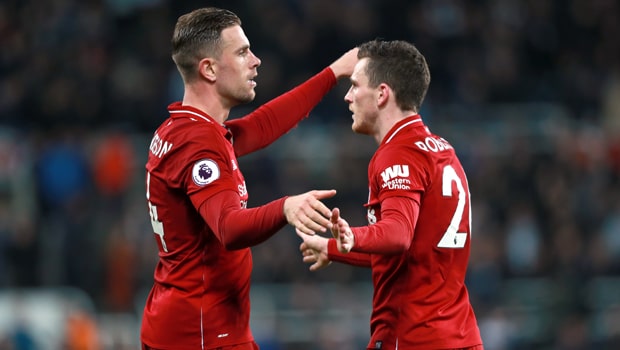 Liverpool full-back Andrew Robertson says he doesn’t think Manchester City will drop points against Leicester City on Monday evening as the battle for Premier League glory goes down to the wire.

Belgium international Divock Origi snatched a late winner in Liverpool’s 3-2 victory at Newcastle United on Saturday evening to send the Reds back to the Premier League summit on 94 points, two clear of defending champions City.

The Citizens, who are 1.17 favourites to become just the third team to win back-to-back PL titles, have the chance to retake the lead on Monday night when they welcome Leicester to the Etihad Stadium.

Pep Guardiola’s men, who are looking for a 13th straight league win, are firm 1.17 favourites to pick up all three points, while a draw is priced at 8.00 and the Foxes are 17.00 outsiders.

Anything less than a win for City will hand the initiative back to Liverpool heading into the final day of the season, but Scotland international Robertson is not expecting the defending champions to drop points.

“We’ve put the pressure back on Manchester City but they’ve had eight days to prepare for Leicester, so I’m sure they’ll be ready,” he told Sky Sports News.

“We won’t expect anything but we can always hope.” The Reds, who could become the first team to finish on 97 points and not win the title, are at home to Wolverhampton Wanderers on the last day of the season.

Before that clash, Jurgen Klopp’s side welcome Barcelona to Anfield for the second leg of their Champions League semi-final as the hosts attempt to overturn a three-goal deficit.