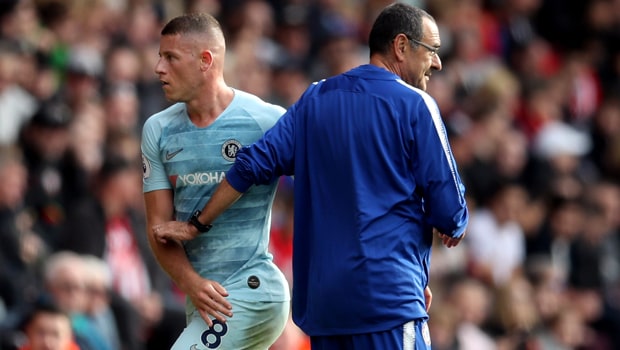 Barkley laid on Eden Hazard to score the Blues’ opener at St Mary’s before he netted from close range after half-time as his side moved joint-top of the Premier League.

Chelsea are unbeaten after eight games, with 20 points on the board, drawing them level with champions Manchester City and Liverpool after those sides played out a stalemate at Anfield later on Sunday.

Barkley became the first Englishman to score and assist in a Premier League game for Chelsea since Frank Lampard almost five years ago.

Barkley joined Chelsea from Everton in January although his impact has been limited so far.

Sarri has been impressed with the 24-year-old’s work since the summer and the Italian feels he has a leading role to play for England in the future.

“I am really happy with him because from the beginning he has improved, day by day, week by week, match by match,” he said of Barkley.

“I think he will become very important in England and for the England national team.”

Barkley was in the England squads that competed at the World Cup in 2014 and the 2016 European Championship under Roy Hodgson, but his lack of game time at Chelsea ensured he missed out this summer as Gareth Southgate’s Three Lions reached the semi-finals in Russia.

Chelsea are 8.50 to win the Premier League title this season following their bright start under Sarri.