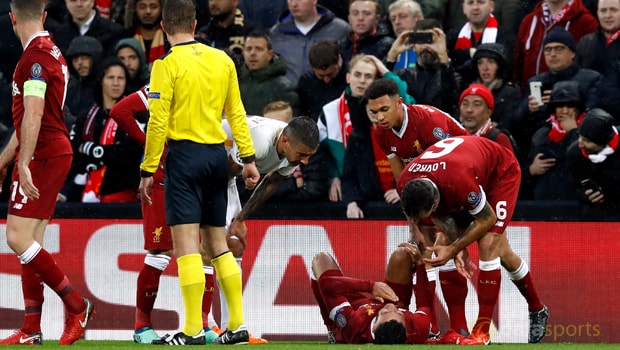 The England midfielder had a scan on Wednesday after going down injured in the first half of the 5-2 win over the Serie A outfit at Anfield.

The Reds have confirmed that his season is now at an end, with the former Arsenal man deemed to have lost his chance of being in Gareth Southgate’s travelling party for the World Cup in June.

“Liverpool FC can confirm Alex Oxlade-Chamberlain’s 2017-18 season is over for both club and country due to a knee ligament injury sustained against AS Roma on Tuesday evening,” read a statement on the club’s official website.

“The midfielder was forced from the field after 18 minutes of the Reds’ 5-2 victory in the Champions League semi-final first leg at Anfield after picking up the issue during an attempted challenge.”

The Anfield outfit have suggested their man will begin a rehabilitation programme aimed at having him ready for the start of the new season, with Russia firmly off his agenda.

“The extent of the injury means Oxlade-Chamberlain is set to miss the remainder of the campaign for Liverpool, as well as the World Cup finals in Russia with England,” read the statement.

“However, Oxlade-Chamberlain will now begin a rehabilitation programme to enable him to reach full fitness again as soon as possible, returning to action next season.”

Liverpool are 2.50 to win the Champions League this season. Real Madrid are now favourites for a third successive triumph after their 2-1 win over Bayern Munich in their semi-final first leg in Germany on Wednesday.