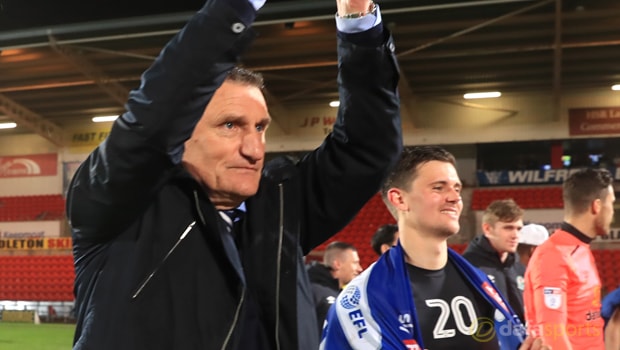 Blackburn Rovers boss Tony Mowbray isn’t going to let the dust settle on sealing promotion from League One, as he is already contemplating Championship football next season.

Rovers skipper Charlie Mulgrew nodded the crucial winning goal in Tuesday’s trip to Doncaster that ensures Blackburn and Wigan will go up automatically from the third tier.

The Latics are two points clear with two games to go, meaning Rovers could still make their return to the Championship as league winners.

But Mowbray is more concerned with fixing his mind on next season and having the Ewood Park club ready for the step up.

Their League One season began with consecutive defeats in August but Rovers have suffered just a single loss in their last 33 league games, a pleasing outcome for the experienced coach. “It’s been a journey. We lost a dozen players and tried to rebuild the squad.

We lost the first two games and you have to remember there is a huge expectation at this club,” said Mowbray.

“To lose one game in 33 is an amazing feat and the players deserve huge credit. League One’s a tough league. “I’m delighted for everybody and the fans deserve it. My brain is already turning to next season and thinking of the Championship.”

Blackburn, along with Wigan and Shrewsbury, have been locked in a three-way scrap for two automatic promotion places since before Christmas.

All three clubs have held top spot at one point or another but, in recent weeks, it was Shrewsbury that fell just short. Mowbray knows the entire club has been involved in a fight to land this promotion.

“It’s been a struggle to get over the line but I’m delighted for everyone, including the people behind the scenes like the people who cook our dinners, the cleaners who are in at 5am, the lasses in the laundry,” he added.

“Everyone cares about the club and I’m delighted for all of us.”

Blackburn are 2.50 to win away at Charlton on Saturday as their quest for the title continues. The home side are 2.80 with the draw at The Valley priced at 3.40.