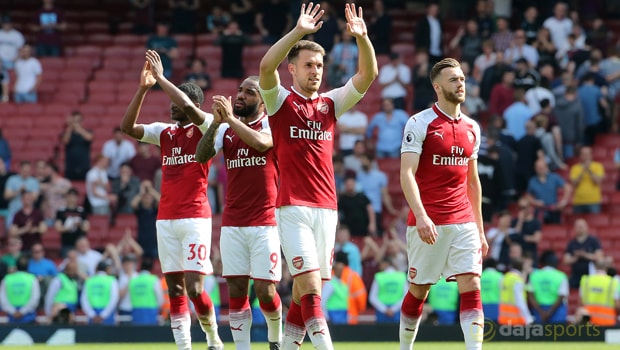 Aaron Ramsey wants Arsenal to win the Europa League this season and give Arsene Wenger the sort of send-off he deserves.

It was announced last week that the long-serving Frenchman will end his 22-year stint as Gunners boss at the end of this season, something Ramsey revealed was a surprise to the players.

Arsenal host Atletico Madrid at the Emirates on Thursday evening in their Europa League semi-final first leg. If they are able to get past the La Liga side, it would mean next month’s final in Lyon would be Wenger’s final act as manager.

It would give him the chance to finally win a European trophy and leave Arsenal with a Champions League berth for their new boss next season.  Ramsey admits it would be a fitting end.

“It’s a massive motivation, to put the emotional side to one side and use it to go on and win this trophy for him,” said the Welsh midfielder.

“It’s going to be weird next season when he’s not here but for now he is, and we have to finish the season off as strongly as possible.

You’ve seen with the amount of fans that turned up on Sunday, and the noise they produced when they got right behind the team, and hopefully they can give him the send-off he deserves.”

Ramsey has been playing under Wenger for almost a decade and his career has blossomed under the tutelage of the Arsenal boss. The day of his departure had to come, but he is shocked it arrived so soon.

“We all sort of knew that one day he was always going to step down as manager, and that day has come and it was a massive shock to the team,” Ramsey added.

“But we have to put those emotions behind us and use it as motivation as well to finish off the season strongly, and hopefully we can lift something for him and let the other emotions come in after that when the season is finished. Then we’ll go from there.”