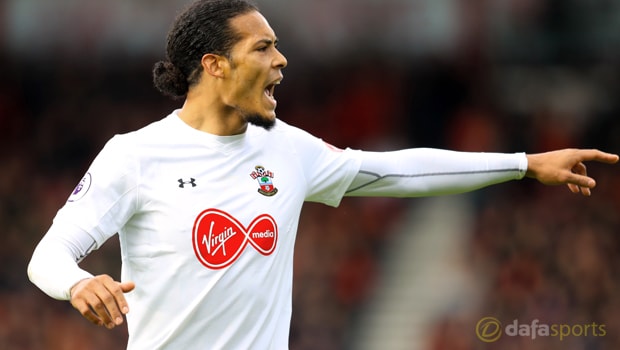 Virgil van Dijk admits he feels honoured to have joined “one of the biggest clubs in world football” after his world record transfer from Southampton to Liverpool was confirmed on Wednesday.

The Netherlands international will reportedly move to Anfield for £75million once the transfer window opens – a fee that will make him the most expensive defender of all-time.

It has been a protracted move to Anfield for the 26-year-old, as Liverpool tried and failed to sign him during the summer, but the Reds have finally been able to conclude the deal and van Dijk cannot wait to hit the ground running on Merseyside.

Writing on his official Instagram page, he said: “Delighted and honoured to have agreed to become a Liverpool FC player!

Today is a proud day for me and my family as I join one of the biggest clubs in world football!

“I can’t wait to pull on the famous red shirt for the first time in front of the Kop and will give everything I have to try and help this great club achieve something special in the years to come.”

The former Celtic player was also quick to pay tribute to Southampton, insisting he will always be indebted to the south-coast club and that he thoroughly enjoyed his spell at St Mary’s Stadium.

“I would also like to take this opportunity to say thank you to [Southampton vice-chairman] Les Reed, the board, manager, players, fans and everyone at Southampton,” he added.

Van Dijk could make his Liverpool debut during their FA third-round clash with city rivals Everton on January 5. The Reds are priced at 1.44 to win that tie, while Everton are available at 7.00 and the draw is on offer at 4.50.