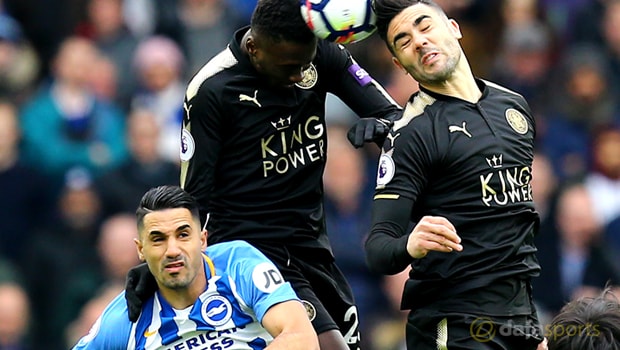 Leicester City midfielder Vicente Iborra has urged his side to continue their unbeaten run in the Premier League as they try to qualify for the Europa League.

Claude Puel’s side are now four matches without defeat Saturday after they battled past Brighton at the Amex Stadium on Saturday.

Goalkeeper Kasper Schmeichel made a superb save to deny Glenn Murray from the penalty spot before Leicester then pushed on to grab all three points.

Iborra headed home a Ben Chilwell cross to open the scoring before striker Jamie Vardy scored his 15th of the season during injury-time.

Leicester grabbed the win with 10 men after Wilfred Ndidi saw red and Iborra has urged them to now believe they can finish in seventh ahead of Burnley.

He told LCFC TV: “I think we have to be ambitious, but with our feet on the floor, we have to play with ambition, but we need to have humility. Of course, we will fight to arrive in a certain place, but it will be very difficult because all the games are very strong, very difficult.

“The other teams play with our objectives and now we have to enjoy this win and start to work and try to improve.

“Of course, [the plan is] to win the next game at home [v Newcastle United] with our fans. We’ve had some games without wins and we want to win now.

“I think today was not our best game but one important thing today is that we have not conceded a goal. We have players with a lot of quality and they can win the game with one chance.”