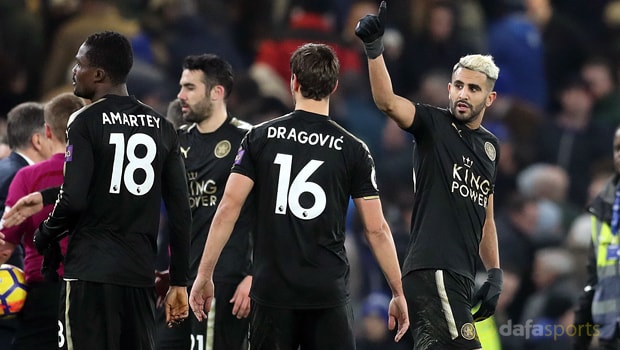 Leicester City boss Claude Puel believes Riyad Mahrez is happy at the club despite speculation linking him with a move away this month.

Mahrez has been linked with a move to Liverpool in recent days following the sale of Philippe Coutinho to Barcelona.

The Algeria international was an effective part of the Foxes team that outplayed Chelsea for long spells in a scoreless draw at Stamford Bridge on Saturday and Puel feels that Mahrez is still enjoying life at the club.

“We can see from today he is enjoying his football, he is happy in playing, in training, he is happy with us and his team-mates,” he said.

“There is a lot of speculation about the players, but of course we are happy with him, and we want to keep our best player.”

Leicester could easily have taken all three points from the champions but, in the end, they were left content with their point after Ben Chilwell was sent off for two quick yellow cards after the hour mark.

A foul on Willian earned him his first caution and referee Mike Jones reached for a second yellow five minutes later when Chilwell brought Victor Moses down.

It left his team to hang on for 22 minutes and Puel was in no doubt that the decision was harsh.

“At the end the feeling is mixed,” said the Frenchman. “A good point, against 11 at the end.

“The red card was harsh. The two yellow cards – it is not balanced. It’s difficult to accept, but the point makes it a little bit OK.”

Leicester are 1.95 to beat Watford at the King Power Stadium next weekend, while the Hornets are 3.80 and the draw is 3.75.