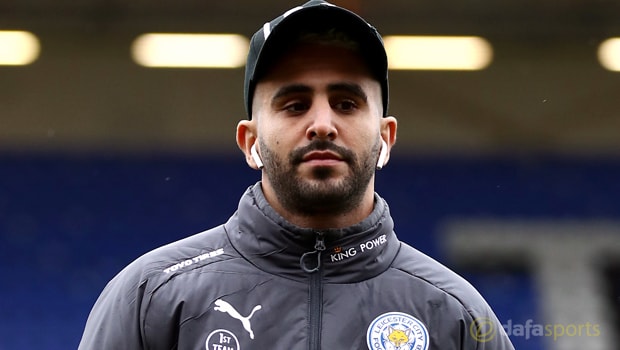 Manchester City boss Pep Guardiola has hinted that his club will try again to broker a deal for Leicester’s Riyad Mahrez in the summer.

The Premier League leaders were in negotiations with the Foxes looking to secure a deadline day deal to bring the Algerian international to the Etihad Stadium.

Man City were reported to have been offering a cash-plus-player deal with a valuation of £65m, but Leicester valued their prized asset closer to £95m and a deal failed to materialise.

Mahrez was omitted from the Leicester squad that lost 2-1 at Everton on Wednesday evening and Guardiola says it was the Foxes that ‘locked the door’ on the deal.

Having now failed with two attempts to get Mahrez, the City boss anticipates trying again in the summer.

“He’s a Leicester player. Everybody knows we were trying but we cannot afford, in this moment, this amount of what they are asking. I understand perfectly,” Guardiola told Sky Sports.

“It was not possible. We are going to see what happens in the summer.”

Mahrez, 26, has made 27 appearances for the Foxes to date this season, scoring nine times.

His form leading into January was particularly strong but his attempts to get away from Leicester have reportedly led to tension with his current teammates.

Manager Claude Puel suggests he must show the correct attitude now in order to be welcomed back into the fold.

“I hope he can come back with a smile and with desire and happy to play with his teammates,” said Puel.

“There is perhaps disappointment for Riyad but I think all the players, all the squad will help him to come back.”

Leicester are 1.80 to beat Swansea on Saturday, while the resurgent Welsh outfit are 5.00 and the draw is 3.50 at the King Power Stadium.