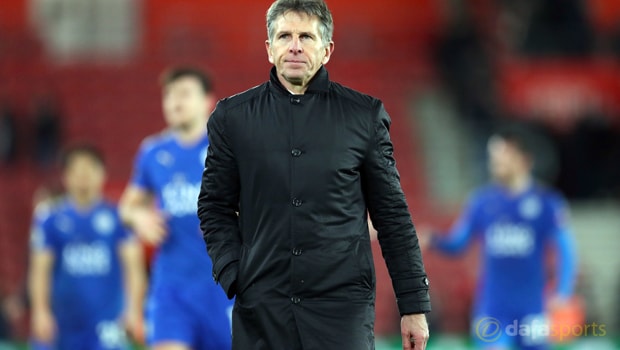 Leicester City manager Claude Puel has praised the strength of his squad after Wednesday’s 4-1 win at Southampton and he hopes to keep the run going over the busy festive period.

Puel made three changes to his starting 11 from the 3-2 victory at Newcastle United with Demarai Gray, Marc Albrighton and Vicente Iborra replaced by Christian Fuchs, Andy King and Shinji Okazaki.

The Foxes produced a brilliant performance at St Mary’s with goals from Shinji Okazaki (2), Andy King and Riyad Mahrez helping the visitors to a convincing 4-1 victory.

Leicester have now racked up four consecutive wins, lifting the club to eighth in the table, and the 2015/16 Premier League champions are just five points adrift of Tottenham Hotspur in fourth.

Next up for Puel’s men is a home clash against Crystal Palace on Saturday and the hosts will be hoping for a positive result with both Manchester clubs then visiting the King Power.

The French tactician was pleased to see the strength and depth in his squad and he hopes the impressive run of form can continue against the relegation-threatened Eagles.

“It was important to make some changes because it’s a busy period,” Puel said after beating his former employers.

“So it was important to see some fresh players. We try to continue this high level of performance. Time will tell if we are successful but this is the challenge.”

Leicester are firm 2.00 favourites to pick up all three points, a draw is priced at 3.50 whilst Palace, who beat Watford 2-1 last time out in a thrilling encounter, are 4.00 outsiders to come away with all the spoils.