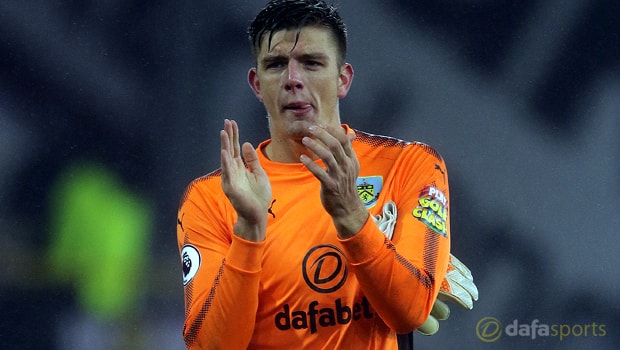 Burnley manager Sean Dyche has praised the performances of Nick Pope after the goalkeeper was thrown in at deep end this season following an injury to number one Tom Heaton.

England international Heaton has been arguably the most consistent performer for the Clarets over the past few seasons, but is currently on the sidelines after dislocating his shoulder in the 1-0 victory over Crystal Palace in September.

Pope, who arrived at Turf Moor in 2016 from Charlton, was thrust into the limelight when coming on as a substitute against the Eagles and managed to keep out the opposition with a composed display.

The 25-year-old has gone from strength to strength since his debut, keeping seven clean sheets from 13 Premier League starts to put Burnley in the hunt for a Champions League position.

Dyche’s men moved up to fourth place after Tuesday’s 1-0 home win over Stoke City although they have been knocked down to sixth following Spurs’ 2-0 win over Brighton and Liverpool’s 0-0 draw against West Brom on Wednesday.

Dyche, 46, has been speaking about the rise of Pope, with the manager immensely impressed with what he has seen so far.

“When he finally gets a chance, he’s confident, I’m confident in him, and he’s performed,” Dyche said.

“And he’s got a group in front of him who’ll give everything to win a game. There’s a long way to go, but he’s made a very healthy start to his career at this level.”

Burnley return to action on Saturday with an away trip to Brighton and the visitors are 3.10 outsiders to pick up all three points.

The draw is priced at 2.80 whilst the Seagulls, on a five-game winless run, are 2.60 favourites.