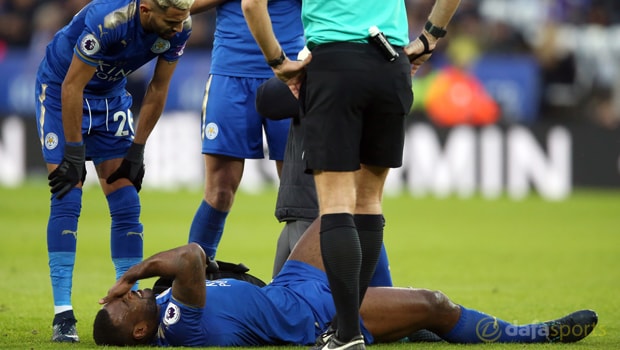 The club captain started the game but he was forced off halfway through the first half of Leicester’s win.

Morgan suffered the injury while trying to tackle Huddersfield striker Steve Mounie and he will now miss Saturday’s trip to Fleetwood for the third round of the FA Cup.

Puel should be able to recall striker Jamie Vardy for the game against Fleetwood after he missed the Huddersfield win as a precaution.

The England international suffered a slight injury in the 2-1 defeat to Liverpool on Saturday but Puel has played down any fears. He added: “Jamie isn’t long-term.

He felt something against Liverpool. We will see for the next game – it’s an important game for him.”

As well as Vardy, summer signing Adrien Silva could play against Fleetwood this weekend.

He made his debut after four months on the sidelines after his transfer was blocked due to paperwork issues.

Silva only played a handful of minutes but Puel is expecting him to build his fitness in the coming weeks.

“It was very difficult for him, for a player with a good match fitness but without the possibility to show his quality, but now it is finished, it is behind him and he is looking forward,” the Frenchman said.

Leicester are heavy favourites to beat Fleetwood and they are priced at 29.00 to win the FA Cup outright this season.