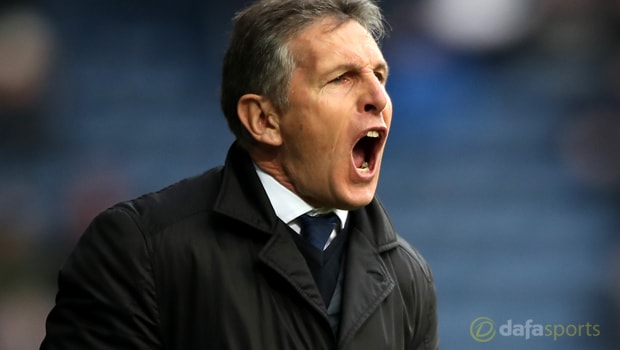 Leicester City boss Claude Puel is confident that his assistant manager Michael Appleton remains focused on his job despite speculation linking him with the West Brom job.

The Baggies are reported to be considering the 42-year-old Foxes assistant manager as a replacement for Alan Pardew.

Leicester entertain Newcastle on Saturday and Puel says that, like players linked with moves, Appleton will simply concentrate on what he is paid to do.

“Like the players before the transfer window, it’s just speculation. It happens in football. Like the players, we all need to keep concentration until the end of the season,” said Puel.

The Foxes boss said he wouldn’t speculate on whether or not Appleton was interested in returning to management on his own steam again, telling a press conference that his right-hand man would have to answer that question himself.

“It’s a good question for him and not for me,” added Puel.

“I am happy about all my staff, including Michael – all the staff from medical to technical. If we do well it is because of the good players but also the good staff around them. Michael has always given his best around the team and kept focused.”

Having been nominated for the Premier League’s manager of the month award for March, Puel says it is a vindication for everyone at the King Power Stadium – not merely a personal accolade.

He wants to retain the focus on a strong finish and maybe even securing European football for next term.

“It will be a good reward for the whole team and staff. If we end the season with good results and perhaps [qualify] for Europe. Individual rewards are not important for me. I want to think only about my team,” he said.