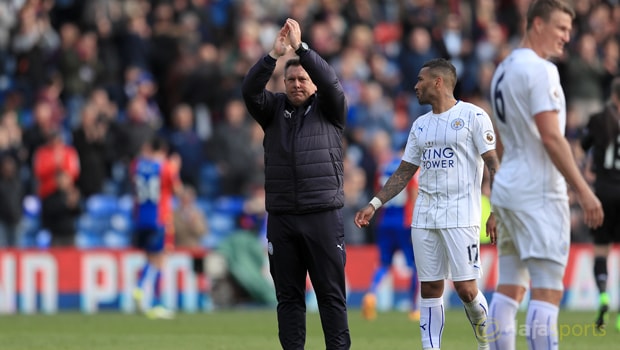 Leicester boss Craig Shakespeare has refused to rule out being drawn into a relegation battle, while defending his decision to field a strong side for Saturday’s clash with Crystal Palace.

Shakespeare was handed a tough task after taking the reins with Leicester following Claudio Ranieri’s sacking earlier this year.

The 53-year-old has massively improved the club’s fortunes domestically since his appointment, while they also remain in with a chance of making the semi-finals of the Champions League.

Leicester, who are priced at 41.00 to win the Champions League, currently sit 12th in the Premier League and nine points above the bottom three with six games left to play following Saturday’s 2-2 draw with Crystal Palace.

The Foxes have already claimed 37 points, which has proven to be the average total required to survive over the last few years, however, Shakespeare has refused to accept they are safe.

Shakespeare said: “I don’t know the average for this season and that is the problem. We don’t know because we don’t know how many points the other teams are going to get.

All I am concentrating on is making sure I stay focussed and the players stay focussed, and try to win every game we are in.”

The Leicester boss came in for some criticism for naming a strong side for their last Premier League outing as they look to overturn a 1-0 first-leg deficit against Atletico Madrid in the Champions League on Tuesday.

Shakespeare has moved quickly to defend his selection and insists he is keen to fight on every front in the remaining fixtures.

He added: “We needed to be competitive and we had to pick a team to do that.

I am not sure how many points it will be for survival so we had to be sure the team we selected was coming here to get a result.”