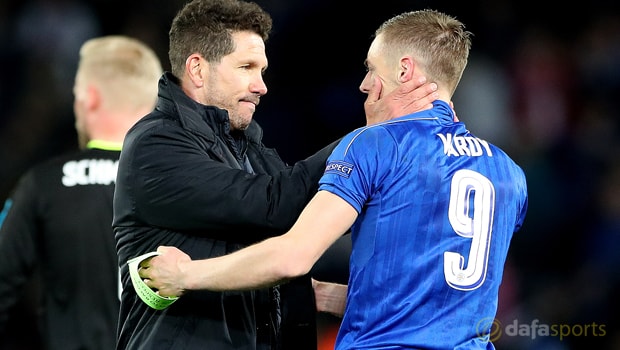 Leicester forward Jamie Vardy admits his side gave it their all despite exiting the Champions League following a spirited 1-1 draw with Atletico Madrid at the King Power Stadium on Tuesday.

The Foxes went into the second leg of their quarter-final tie looking to overturn a 1-0 deficit from the first fixture, but their task was made even harder when Saul Niguez headed Atleti into a first-half lead.

England international Vardy did draw Leicester level on the night just after the hour mark but, despite a spirited effort, Leicester ultimately came up short.

Leicester have now crashed out the competition, but Vardy was pleased by his side’s performance and he is convinced on another day they could have progressed.

“We absolutely gave it our all, especially in the second half,” he told BT Sport. “They made a lot of blocks on the line.

“We were in the ascendancy. We made a tactical change with Leo [Leonardo Ulloa] on to give an aerial threat. Unfortunately it wasn’t to be.

“But we gave it our all and left it all out on the pitch. On another day some could have gone in. But we can be proud.”

Craig Shakespeare’s men must now turn their attention back to the Premier League and Vardy believes they still have a lot to play for on the domestic front.

He added: “We have some unfinished business in the Premier League. That was a new experience for a lot of the lads and we have given it our all.”

Leicester face Arsenal at the Emirates Stadium on April 26 having lost just one of their last seven league matches, although they remain available at 201.00 to be relegated at the end of the campaign.