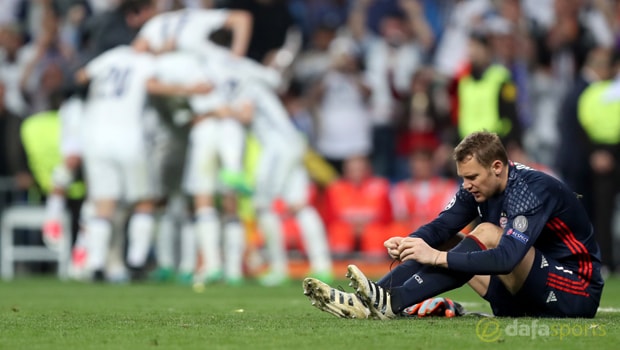 Bayern Munich have confirmed that Manuel Neuer will miss the rest of the season after fracturing his foot during the club’s Champions League exit at the hands of Real Madrid on Tuesday.

The Bavarians hopes of claiming the treble this season were ended at the Bernabeu, as despite overturning a 2-1 deficit from the first-leg, Bayern were eventually eliminated 6-3 on aggregate after extra time.

Cristiano Ronaldo scored a hat-trick during the contest, and to add insult to injury, German international Neuer sustained his fracture while trying to stop the Portuguese’s third goal.

Bayern confirmed the news of Neuer’s injury after the contest, admitting that he faces a lengthy spell on the sidelines.

The club tweeted: “Sadly, @Manuel_Neuer suffered a fracture in his left foot during #RMAFCB and is set for a lengthy spell out.

Get well soon, Manu!” Chairman Karl-Heinz Rummenigge then elaborated on the diagnosis, admitting that he faces eight weeks on the treatment table and will therefore miss the rest of the campaign.

“He will be out of action for eight weeks.” The 31-year-old’s absence will be a huge blow to Bayern, who will be looking to hold off the challenge of RB Leipzig in the Bundesliga title race, as well as claim overall glory in the DFB-Pokal.

Sven Ulreich is expected to deputise in Neuer’s absence, with Bayern’s next match coming at home to Mainz in the Bundesliga on Saturday.

Carlo Ancelotti’s men are priced at 1.18 to secure all three points at the Allianz Arena, while Mainz are available at 19.00 and the draw is on offer at 7.50.