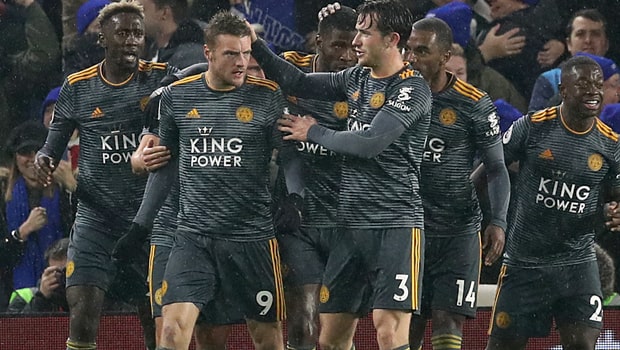 Leicester City star Jamie Vardy has piled the praise on his team for their spirit and togetherness after they secured a draw against Brighton on Saturday.

The Foxes fell behind inside half an hour when Seagulls talisman Glenn Murray headed home. Leicester playmaker James Maddison was dismissed after two yellow cards in as many minutes, with the second one shown for diving.

Despite all the setbacks, Leicester battled hard and eventually got their goal from the penalty spot.

Vardy stepped off the bench before being fouled by Beram Kayal and Kelechi Iheanacho fired home from the spot.

The former Fleetwood Town man has struggled with a groin injury of late but he has been impressed by his team’s spirit in recent weeks.

“I think it was a good point to get,” Vardy told the club’s official website.

“Obviously, being down to 10 men and 1-0 down, you’ve seen how the lads have battled together and how we’ve taken it to Brighton even though we were reduced to 10.

“I think with that performance, especially in the second half, we definitely deserved it. It’s just testament to all the boys and how close we are as a group.

“Everyone will run themselves into the ground for each other and that showed on the pitch.”

Vardy will be hoping to start Leicester’s next match against Watford, with the Foxes 2.25 favourites.

The draw is 3.30, while Watford remain 3.40 outsiders. Before that they face Southampton in a rescheduled EFL Cup clash before further league meetings with Fulham, Tottenham and Crystal Palace.