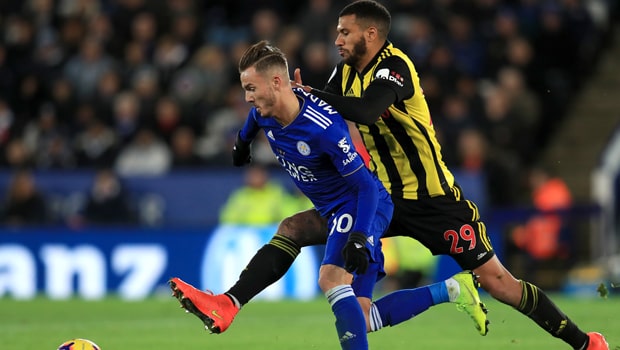 James Maddison admitted his game-securing volley is one of the best goals of his career after he inspired Leicester City to victory over Watford at the King Power Stadium on Saturday.

Midfielder Maddison netted his fourth goal of the season when he wrapped up a 2-0 win over Watford on Saturday, volleying in after collecting Marc Albrighton’s cross and juggling past Adrian Mariappa.

Jamie Vardy’s 12th-minute penalty gave the Foxes the lead after he was brought down by goalkeeper Ben Foster while Etienne Capoue was sent off late on for the Hornets.

Englishman Maddison’s strike was some sort of redemption after he was sent off for diving against Brighton last week and he was delighted with the quality of his finish.

He told the club website: “It’s right up there. It’s a different sort of goal, it’s not like an individual strike from distance or a free-kick. It was a really good counter-attack, a good team goal.

“I picked it up from deep, I found Vards who was in a good bit of space and he got it out to Marc.

The quality Marc has got from wide areas, he put it on my toe, didn’t he? I had a good touch and thankfully I stuck it away. I’m really chuffed with that one.

“It was a very successful afternoon. We haven’t won here since September I’m told. That’s quite a long time. To get three points and a goal after last week, I’m really happy. That winning feeling, you never get bored of that.”

Leicester return to action on Wednesday when they make the trip to Craven Cottage to take on relegation-threatened Fulham and the Foxes are 2.30 favourites to pick up the win, whilst a draw is priced at 3.50 and the hosts are a 3.00 chance.