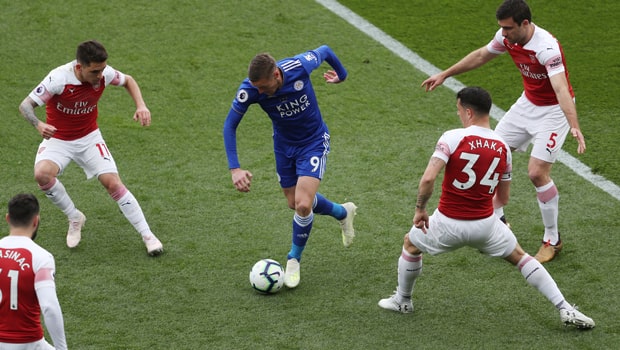 Jamie Vardy feels the intensity demanded by Brendan Rodgers’ style of play has made a key difference to Leicester City since he arrived.

The Foxes recorded an impressive 3-0 win over Arsenal at the King Power Stadium on Sunday. They have gathered 16 points from eight matches since Rodgers succeeded Claude Puel in February, allowing the Foxes to settle in the Premier League’s top ten.

The club’s all-time top Premier League goalscorer, who has 18 strikes to his name this season, followed Youri Tielemans’ header with a second-half double as the ten-man Gunners were cut apart on Sunday.

Reflecting on the game, Vardy suggested Leicester were eager not to be penned back by Arsenal’s typical possession-based game, something he felt they allowed to happen at West Ham previously. “We thought from the off that we wanted to get out,” he said.

“Last week, from the start especially, we were a bit slow, but in the second half we showed what we’re about. This week we wanted to do a full 90 minutes and I think we’ve done that.”

The former England frontman is clearly relishing playing under Rodgers and he feels their new style of play is helping to create chances.

Champions-elect Manchester City are next up at the Etihad Stadium on Monday and Leicester will go there feeling they can take something from the game.

“I think the intensity that he’s got us playing at and the pressing… we’re winning the ball a lot higher up which gets us a lot more opportunities,” Vardy added.

“If you look at the creativity that we’ve got in behind, we’re always looking for the killer pass. In the dressing room we’re just taking each game as it comes.

“We’ll get back out on that training field now and we’re looking forward to Manchester City next. We’ll try and put in a performance to get as many points as possible.”