Iheanacho’s Double Knocks Man U out of FA Cup, City To Face Chelsea in Semi-Final 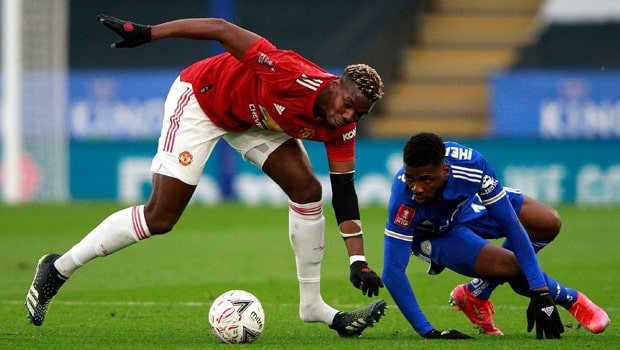 The Foxes ended the Red Devils’ run of unbeaten matches away from home in the Premier League and FA Cup.

Brendan Rodgers’s side took the lead in the first half when Iheanacho benefited from Fred’s error to intercept the ball and round the goalkeeper.

Mason Greenwood equalized for the Red Devils in the 38th minute from a Paul Pogba’s assist as both teams went into the break level.

The Nigerian forward then provided the assist as Youri Tielemans scored to put the home side in the lead five minutes after the break.

Kelechi Iheanacho was then allowed to score his seventh goal in five games with a free header by the near post with twelve minutes left to play.

Leicester City managed to hold on and secure their first FA Cup semi-final appearance in over thirty years, and their reward is a semi-final clash against Southampton, who defeated Bournemouth on Saturday.

An Oliver Norwood’s own goal in the 24th minute gave the Blues the lead before a late goal by Hakim Ziyech in the 90th minute ensured a win for Thomas Tuchel’s side.

Manchester City, on the other hand, defeated Everton 2-0 on Saturday to seal a semifinal place.

The semi-finals will take place on the weekend of April 17th.

Meanwhile, Arsenal came back from 3-0 down to get a point away from West Ham in one of the few Premier League games played this weekend.

Jesse Lingard, Jarrod Bowen, and Tomas Soucek had given West Ham a 3-0 lead just 30 minutes into the game.

However, an own goal from Tomas Soucek in the first half and another from Craig Dawson in the second half allowed Alexandre Lacazette to claim a point for the Gunners with 8 minutes left.