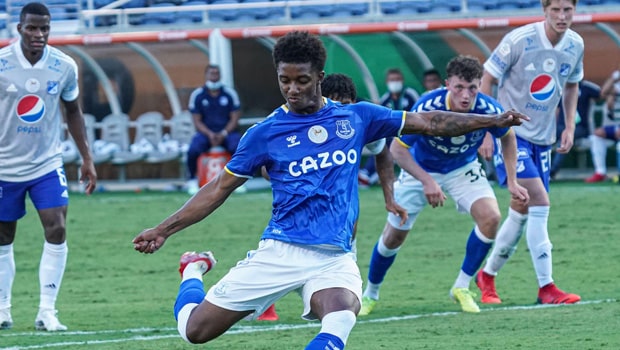 Demarai Gray, English winger and most recently with Bayer Leverkusen on loan from Leicester City, signed a three-year contract with Everton this week.

The contract runs through June 2024 with a four-year option. The move is reportedly worth £1.7 million.

The 25-year-old scored one goal in 12 appearances with Leverkusen last season.

“I’m delighted to be back in the Premier League at such a big club and I’m excited to play with the team and get to work,” Gray said. “Everton are a very big club and the main objective is to be pushing and competing back up there in the table.”

Following Rafa Benitez taking over as manager at Everton, the club has been active in the transfer market, with prior signings of Andros Townsend and Asmir Begovic. Benitez had replaced Carlo Ancelotti earlier in the offseason.

Everton are in Florida, USA this week as part of exhibition matches in the Florida Cup.

Gray arrived in Florida for a medical prior to the move being official.

“Speaking to the manager and [director of football] Marcel Brands, I had a really good feel for the club and I feel this is a place where I can continue to develop,” Gray said.

“The manager, with his ambition and what he has won in the past, is important and we’ll look to push forward and compete with the top clubs. I think a club of this magnitude has all the potential to be right up there.”

“I want to push on, be a pivotal player in the squad, help the team score goals and assist goals,” Gray added. “I feel like I’m at a period in my career now where I can put everything together and achieve the targets I have set for myself.”

Everton match up with Colombia’s Millonarios club Sunday in the Florida Cup.