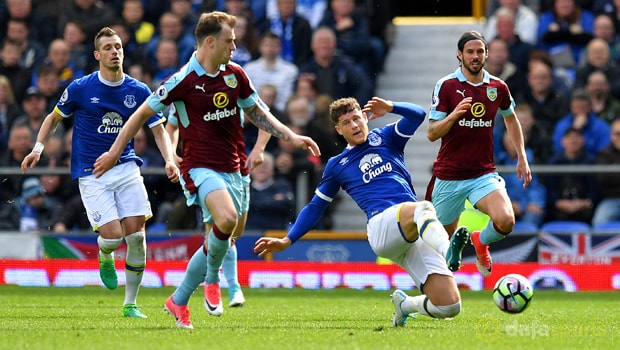 Ross Barkley was given the support of his manager and captain following his man of the match performance in Everton’s 3-1 win over Burnley on Saturday.

The Toffees midfielder was the subject of a controversial newspaper report this week, one that led the Everton hierarchy to ban the offending publication from attending Goodison Park or the club’s training ground going forward.

Barkley, 23, answered his critics with an all-action performance as Ronald Koeman’s side recorded an eighth successive home league victory for the first time in the Premier League era.

The England midfielder was at the heart of Everton’s crucial second goal on 70 minutes, his shot deflecting off Burnley’s Ben Mee to put the home side in front.

Phil Jagielka had put Everton ahead just after half-time and, while Sam Vokes quickly levelled from the penalty spot, Mee’s misfortune and leading goalscorer Romelu Lukaku on 74 minutes made the points safe for the home side.

Manager Koeman was delighted to see his player respond in the right manner after a testing few days.

“We know all that kind of stuff off the pitch is not the best, but Ross dealt really well with that and showed today he was focused.

He showed his qualities in the second half,” said Koeman. Goalscorer and club skipper Jagielka rowed in behind his teammate, insisting Barkley is too strong to allow outside forces distract him.

“I’ve known Ross a long time now and nothing fazes him,” said the club captain.

“These things can happen. We had an academy day a couple of days ago, and he was part of that.

“He’s just a normal lad who wants to play football. I’ll give him the goal even though it’s gone down as an own goal.”

Everton are 2.30 to win their next game away at West Ham on Saturday. The Hammers are 3.00 and the draw is 3.40 for the London Stadium clash.