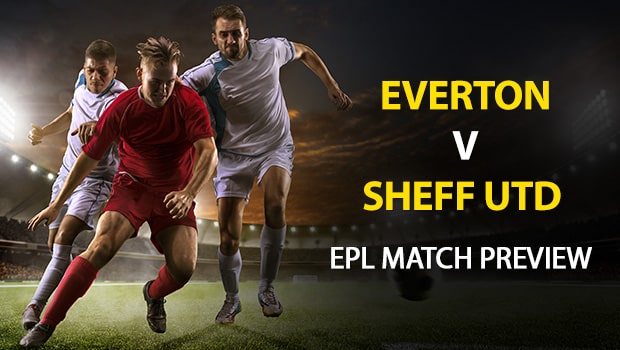 Draw: There’s a 25-to-26 percent chance there’s a draw. That happens in under 22 percent of simulations, suggesting no added value on the pick.

Last 6: Coming off a 3-1 road loss vs Bournemouth, Everton heads into this matchup with 2 losses, 1 win and 3 draws in their last six overall. Sheffield has 2 losses, 2 draws and 2 wins as they come off a 1-0 home loss vs Southampton.

Back Home: Everton was absolutely horrendous their last time out vs Bournemouth and will look to get back on track at home. They have won six in a row at Goodison.

Head to Head: These two sides last matched up in any competition back in 2007 (League Cup), and last faced each other in Premier League in 2000. Everton won that 2007 matchup 3-0.

Oliver McBurnie had a 32 percent chance to net the ball for Sheffield. He averages 1.18 shots overall per sim, 0.49 shots on goal per and 0.37 goals per sim.

Richarlison has a 50 percent chance to score for Everton. He averages 3.26 shots overall per sim, 1.03 shots on goal per and 0.71 goals per sim.

Four-star (out of four) hot trend pick. The average combined score in simulations is 3.35 goals.