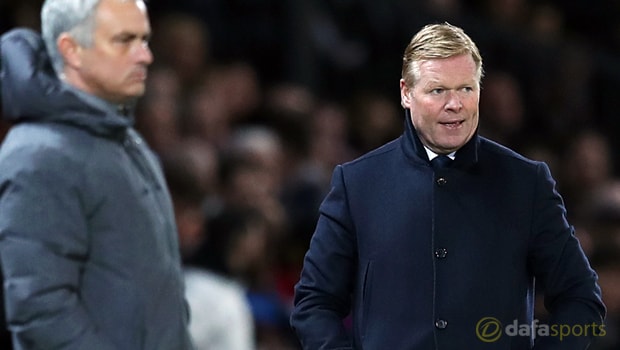 Ronald Koeman has hit out at comments made by his Manchester United counterpart Jose Mourinho and insists Everton still need time to develop.

The Toffees have struggled for consistency at the start of 2017-18 and they currently sit 18th with just four points from their opening five games, while they also fell to a 3-0 defeat in their opening Europa League group game at the hands of Atalanta.

Everton, who are priced at 15.00 to win the Carabao Cup, were expected to make huge strides this season after spending around £140million over the summer to enhance their squad.

The Merseyside outfit have already faced the likes of Manchester City, Chelsea, Tottenham and Manchester United and the Dutchman has called for calm as they prepare to play their next four games in all competitions on home soil.

Koeman’s men fell to their latest defeat on Saturday, 4-0 at the hands of United, and Red Devils boss suggested in his programme notes that Everton want “to at least secure a top-four position”.

However, the former Southampton boss feels that is not realistic and insists they will have a more accurate reading on their capabilities over the next few weeks.

Koeman said: “I read the programme of United and my colleague told about Everton, ‘They are spending £140million, they need to go for the top four’.

“When you look at the fixtures at the start of the season, we knew we wouldn’t win them all.

“We have played Manchester City, United and Chelsea away, plus Tottenham at home. Four title contenders, with the Europa League in between.

“Sorry, if there’s anybody in this room and outside who sees something realistic (about) what is possible for this Everton, please come on. Be realistic and let’s talk at the end of the season.”