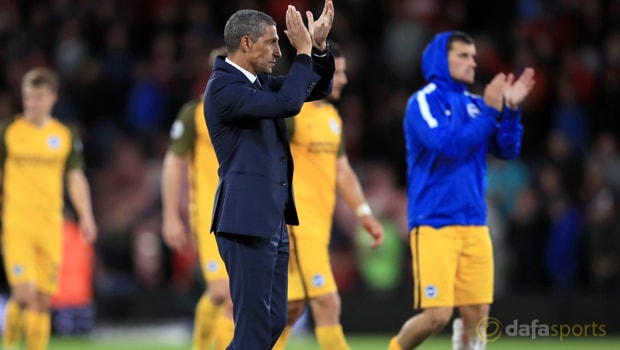 Brighton boss Chris Hughton has confirmed he will rotate his squad for the Carabao Cup clash with Premier League rivals Bournemouth on Tuesday.

The Seagulls travel to the Vitality Stadium for the second time in five days on Tuesday for their League Cup meeting with Bournemouth.

Brighton fell to defeat in Friday’s clash with Andrew Surman and Jermain Defoe both scoring to help the home side to secure a 2-1 triumph.

The newly-promoted side will be hoping for a better result when they head back down the coast for their Carabao Cup third-round tie.

Hughton has admitted he is set to rotate his starting eleven with some of his summer signings in line to win a full debut.

Winger Jose Izquierdo, who joined for £13.5million from Club Brugge, has twice made appearances off the bench but he is expected to get the nod from the start.

Meanwhile, deadline-day addition Ezequiel Schelotto is yet to make an appearance, despite having been in the squad for Friday’s loss.

Brighton have been short in attack during the early stages of the season with Glenn Murray and Tomer Hemed only recently recovering from injury, while Sam Baldock is currently sidelined.

Hughton insists he is concerned about overworking players at this early stage of 2017-18 and has vowed to utilise his full squad.

“The only area I have got to think about is that at this moment, with no Sam Baldock, we’ve in effect got two number nines,” Hughton said.

“Certainly the squad will get a really good opportunity.”

Bournemouth can be backed at 2.00 to book their place in round four of the Carabao Cup, while Brighton are priced at 3.80 to come out on top, and the draw is available at 3.50.