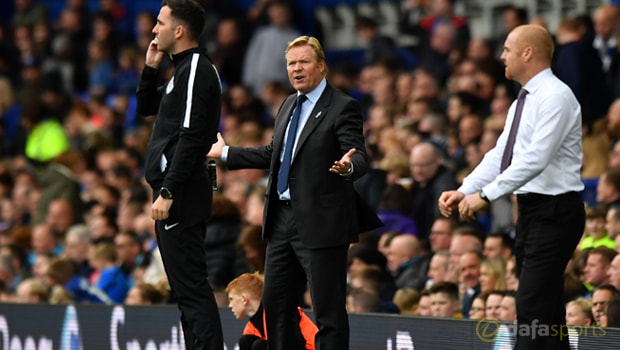 Ronald Koeman refused to answer questions of his future in charge of Everton after they fell to another defeat at the hands of Burnley on Sunday.

Everton, who are priced at 23.00 to be relegated, head into the international break sitting just two places and two points above the bottom three, having won just two of their opening seven fixtures.

The Toffees have lost four of their last five and pressure is really starting to grow on the Dutchman after he invested so heavily in the squad over the summer.

Koeman drafted in nine new additions during in the summer transfer window with an outlay of around £140million with the hope of challenging for a top-four spot.

However, the new arrivals have struggled to settle and reports have suggested that Koeman is running out of time to save his job.

The 54-year-old insists Everton aren’t happy to accept their current run of form and has vowed to get an improvement out of his squad when they return from the international break.

Koeman said: “I have experience and if you win your life and your day is different.

If you lose of course it is not nice if you have two weeks in an international break and get a defeat, but that is life and you have to accept it.

“But I don’t accept to sit back and wait. We will continue and I will try to do the best for my job. All the stuff and questions are not in my hand but I try to get the best out of the players.

“If there is no commitment and no aggression that is maybe a reason to think about my future but I thank the players for their commitment.

“I can’t complain about my players, they did everything. Maybe we could create more but it is not so easy against Burnley.

“We tried everything; the commitment and spirit of the players was really positive and the final result was not.