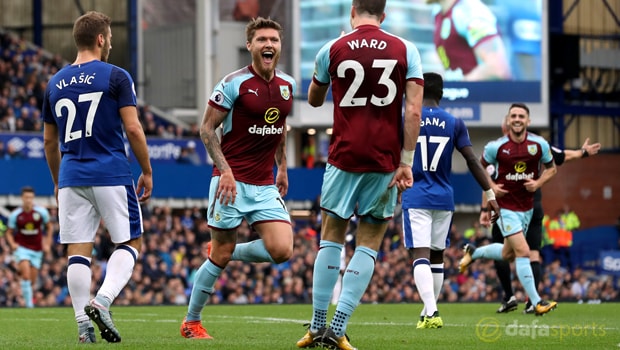 Jeff Hendrick believes Burnley have played some eye-catching football this season and insists they are aiming to finish as high as possible following their latest win over Everton.

The Clarets struggled to pick up results on the road last season but appear to have put that issue firmly behind them in 2017-18.

Burnley’s 1-0 victory over Everton at Goodison Park has moved them up to sixth in the Premier League and they remain unbeaten away from home after four fixtures.

Sean Dyche’s men have beaten Chelsea and Everton on their travels, while also drawing away at Tottenham and Liverpool.

Hendrick was the match winner on Sunday as he finished off a move which contained 24 passes in the build-up and he feels Burnley, who can be backed at 5.00 to be relegated, are now a much-improved side.

The Republic of Ireland international believes they deserve more credit for their style of football and insists they are ready to fight for every point as they look to finish as high as possible.

Hendrick told Burnley’s official website: “The lads worked the ball well from side to side and then a great switch across and thankfully I was on the end of it.

But it started way back earlier than that and it was a great goal.

“Hopefully we can slowly change the perception people have of us. “This year we have played some great football.

“But we don’t mind. We have the confidence in the group and we just need to keep that going.

“We have started the season well. We want to get a result from every game and we want to keep pushing.

“Teams know they are going to get a hard game when they play us. We will fight to the end.

“We are working hard every week in training and we want to be as high up the table as we can be.”