Ronald Koeman: Board have final say 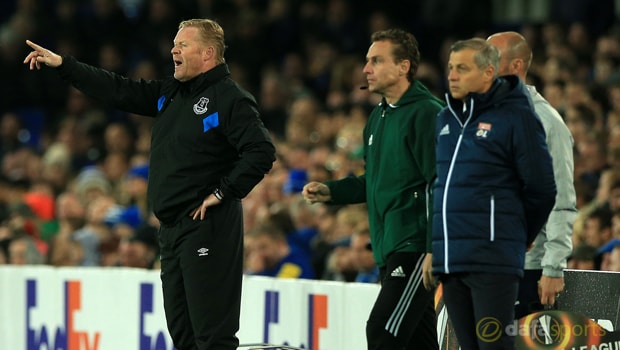 Ronald Koeman says the board will have the final say on his future after Thursday’s Europa League defeat to Lyon heaped further pressure on the Everton manager.

Everton went into the clash against Lyon at Goodison Park on a three-game winless run and in desperate of a result to lift the spirits around the Merseyside club.

However, the Toffees were on the wrong end of a 2-1 scoreline and they sit bottom of Group E, having taken just one point from a possible nine – the worst start to a Europa League group stage by an English club.

Expectation levels were high at the start of the season after Koeman splashed more than £100million on new players, bringing in the likes of Gylfi Sigurdsson, Wayne Rooney, Michael Keane and Jordan Pickford.

Everton have been just as poor in the Premier League, winning just two of their eight matches, and the club are languishing down in 16th position, just two points above the relegation zone.

Another poor result could spark the end of Koeman’s reign but the Dutchman insists he will not walk away, leaving that decision down to the board if they feel it necessary to sack him.

“The final decision is by the board not myself,” he said. “If the board thinks I am not the right man they will tell me.

Everton return to action on Sunday with a home clash against Arsenal and the hosts are 3.75 outsiders to clinch all three points, a draw is priced at 3.50 whilst the Gunners are 2.05 favourites.