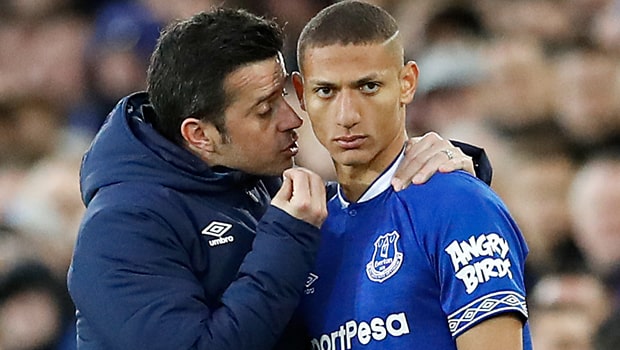 Everton forward Richarlison believes the club are lucky to have so many attacking options and feels they help to bring the best out of each other.

The Toffees spent £35million to lure Richarlison away from Watford last summer and the fee could potentially rise as high as £50million due to add-ons.

He wasted little time in endearing himself to the Everton faithful as he netted twice in a 2-2 draw with Wolves on the opening day of the season.

But it wasn’t long until his season started to derail, just two weeks later he was sent off for headbutting Bournemouth’s Adam Smith.

Richarlison has since managed to control his temper, talking with his feet, and he boasts 12 Premier League goals.

Only seven players have hit the back of the net on more occasions in the league and he feels his improvement is down to competition in the forward line.

Everton don’t have a reliable out-and-out striker, having failed to replace Romelu Lukaku, but the likes of Dominic Calvert-Lewin, Bernard, Theo Walcott, Ademola Lookman and Gylfi Sigurdsson have all chipped in.

The Brazilian believes the wealth of options available to Marco Silva is a huge positive and insists they are working together to achieve their goals.

Richarilson told Everton’s website: “It is very important to have so many strong attacking players. “We are a group that wants to reach a very high level together.

“It is vital to have players who, during a match, can pull off something – a trick, a piece of skill, a bit of genius – which can decide the game. And we have those players at Everton.”

Richarlison is likely to be in the starting XI when Everton resume their Premier League campaign at West Ham on Saturday.