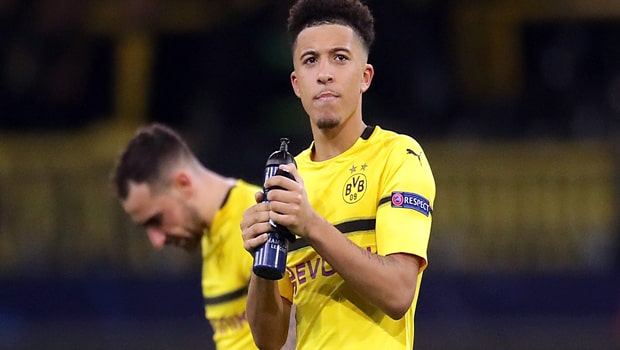 Borussia Dortmund director of football Michael Zorc admits Jadon Sancho is unlikely to retire with the club but is certain the winger will be there next season.

Sancho’s stock has risen at an incredible rate since making the bold decision to leave Manchester City for Dortmund in the summer of 2017.

The 18-year-old felt he was ready for regular senior football, something City didn’t agree with at the time, and he took matters into his own hands.

That decision has done wonders for his career after establishing himself as a key figure for the German side this term, while he has also forced his way into Gareth Southgate’s plans with England.

Sancho is tied with Lionel Messi for the most assists across Europe’s top-five leagues and could end 2018-19 with the Bundesliga title in his hands.

Unsurprisingly, his improvement has led to interest from a number of top clubs with both City and Manchester United understood to be in the mix.

Dortmund, who are priced at 3.10 to win the Bundesliga, paid just £8million to sign the teenager from the Citizens and reports claim it could take upwards of £100million to prize him away from Die Schwarzgelben.

Zorc has refused to slap a price tag on the winger, who starred for England against the Czech Republic on Friday, but admits even the ‘biggest clubs’ will struggle to afford his services.

Zorc told Bild: “I’m far from putting a price tag on Jadon. “But I say: his transfer would be difficult even for the biggest clubs in the world at the moment.”

Zorc accepts that Sancho will eventually move on but is confident he will be on their books when the 2019-20 season gets underway.

He added: “Jadon will play for Borussia Dortmund next season. “He certainly will not play until his retirement in Dortmund. That is also true.”