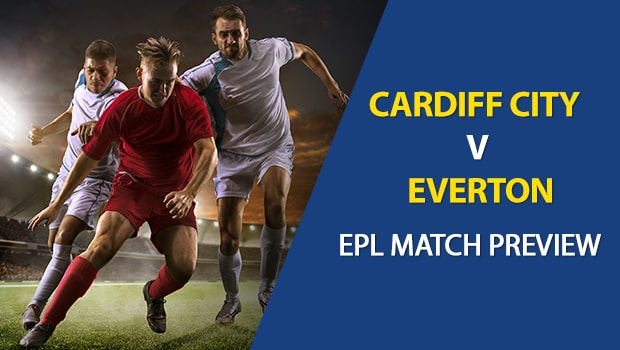 Premier League is back this weekend with teams in action for Week 13 of the 2018-2019 season. Everton and Cardiff City match up at Goodison Park on Saturday.

Betting on the Draw: Odds — at 4.83 — indicate there’s a 20.7 percent chance the match ends in a draw. There’s a draw in about 20 percent of AccuScore sims, suggesting no added value on the draw.

A Rare Win: Cardiff City is coming off a last-minute 2-1 victory over Brighton thanks to a goal from Souleman Bamba. Bamba has an 8-to-9 percent chance to score in this match. In general, though, Cardiff City has just two wins overall in their last 14 matches, with three straight losses on the road.

Mentorship: Earlier this week, Brazil captain Neymar said he would like to help Everton forward Richardlison, essentially act as a mentor. Everton signed him for £40m in the summer. Following a nice start to his Everton campaign, Richarlison was recently called up to the Brazil national team — scoring twice in his first four appearances.

Head-to-Head: These two sides last faced off in Premier League action way back in 2014 when Everton got the 2-1 win after a 0-0 tie at halftime.

Callum Paterson has close to a 22 percent chance of scoring for Cardiff City. Paterson averages 1.25 shots overall per sim, 0.46 shots on goal per and 0.24 goals per sim.

Gylfi Sigurðsson has close to a 49 percent chance to score for Everton. He averages 3.36 shots overall per sim, 1.19 shots on goal per and 0.67 goals per sim.

Odds — at 1.95 — indicate there’s a 51 percent chance Everton win this match. They win 68 percent of AccuScore sims, suggesting some added side value on the pick. The average margin of victory for Everton in AccuScore sims is +1.45 goals.

Everton winning outright is a four-star (out of four) AccuScore hot trend pick.