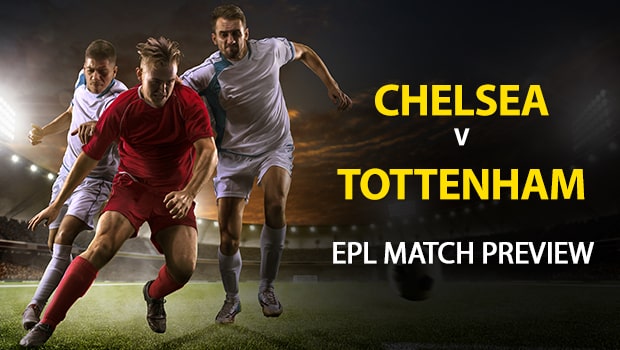 Chelsea and Tottenham go head-to-head at Wembley this weekend as Maurizio Sarri and Mauricio Pochettino face off in their own version of the London derby. This is probably one of the more anticipated matchups following the international break.

Betting on the Draw: Odds indicate there’s a 28 percent chance the match ends in a draw. There’s a draw in under 27 percent of AccuScore sims, suggesting no value on the draw.

Momentum on Both Sides: Pochettino’s side have only two losses overall in their last 12, those coming at the hands of Barcelona and Manchester City. The Blues, on the other side, haven’t lost in their last 18 overall.

Last Time Out: Tottenham heads into this match following a 1-0 win over Crystal Palace; Chelsea recorded a 0-0 tie with Everton.

Head-to-Head: This will be Premier League matchup No. 52 for these two sides, with Chelsea winning 27 times and Tottenham, 6. There have been 19 draws.

For Tottenham, Harry Kane has close to a 48 percent chance to score. He averages close to four shots overall, 1.63 shots on goal per sim and 0.64 goals per sim.

Odds indicate there’s about a 35 percent chance for the Spurs to win outright, but they win close to 42 percent of AccuScore sims.

Tottenham winning is a four-star (out of four) AccuScore hot trend pick.