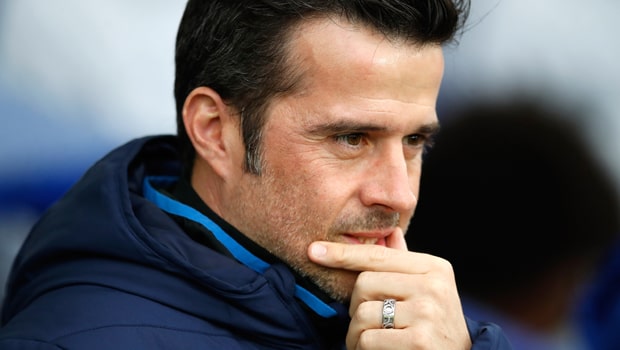 Everton boss Marco Silva says the club are keen to sign Kurt Zouma and Andre Gomes on permanent deals, though he admits that all parties will have to show the same desire if it is to happen.

Defender Zouma is on loan from Premier League rivals Chelsea, while midfielder Gomes is on a season-long secondment from parent club Barcelona.

Both players have impressed during Silva’s first season as Toffees boss and the manger admits he’d like to secure their longer-term futures.

However, there are many parts to the jigsaw this summer before Everton can make that happen, admits Silva, after both players recently suggested they were enjoying life at the club.

“There is always a chance but it is not just in our hands,” Silva commented when asked if permanent deals might be in the offing.

“They are happy here, that is a good sign. That means they are performing, they are enjoying, they are helping us also.”

Silva and Everton are targeting seventh spot in the Premier League and a potential Europa League place between now and the end of the season. They are currently ninth, a single point behind Wolves and Leicester above them.

The Toffees boss suggests that securing the futures of Zouma and Gomes is likely to be a task for the summer.

“We are happy with them, that is true, and it is up to us to do what we shall do to try and keep them,” he added.

“It is not just in our hands, the players and their clubs have to decide together. At the right moment we will do something.”

Everton are 1.75 to continue their push for Europe by overcoming relegated Fulham on Saturday at Craven Cottage. The Merseysiders are 8.50 to win the game 2-0.