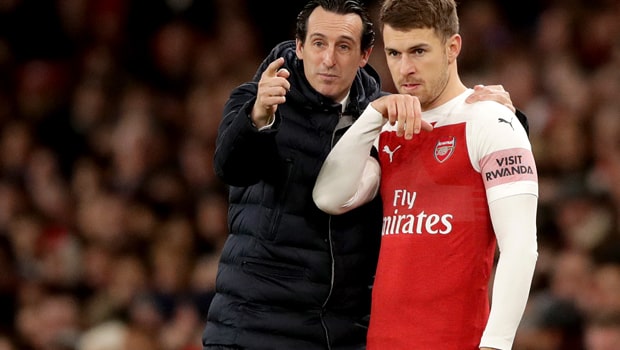 Unai Emery believes midfielder Aaron Ramsey has the power to do “something special” before he departs Arsenal this summer.

The Welsh ace was on the scoresheet as the Gunners defeated Napoli 2-0 at the Emirates on Thursday evening in their Europa League quarter-final first leg.

Ramsey scored the opener in the 14th minute and Emery’s side took a big step in the tie as Lucas Torreira’s strike was deflected in by Kalidou Koulibaly shortly afterwards, giving Arsenal a precious lead to take to Italy next week.

Ramsey is set to leave the club in the summer to join Juventus after he failed to agree a new contract and signed a deal with the Serie A champions in January.

The 28-year-old is seeing out his time in north London with typical commitment and Emery feels he can help deliver “something special” before he moves on.

“Here, with our supporters, he gives us more than all he can to do the best performance, not individually but thinking in the collective.

On the overall performance, the Spaniard declared satisfaction, though he knows Arsenal easily could have killed the tie off, given the chances they passed up. Having avoided conceding an away goal, however, he was content. “I’m 60 per-cent happy,” said Emery.

“I think we deserved the result. We controlled the match with the ball and positioning. We can take their box with players and scoring two goals.

“We didn’t concede a lot. In the second half was different because they pushed more and had more possession. We know it’ll be very difficult there. They’ll use all their attacking possibilities against us.”

Arsenal are 4.00 to win the Europa League this season, with London rivals Chelsea favourites at 2.63.