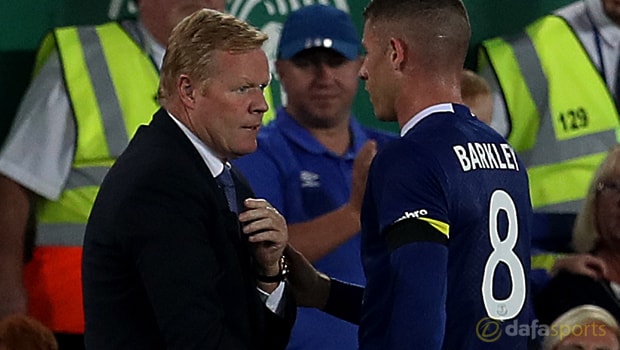 Everton midfielder Ross Barkley must improve his all round game if he wants a move to one of the Premier League’s elite clubs.

That is the view of his former Goodison Park teammate Leon Osman, who says Barkley’s brilliance is not in question but that he must demonstrate the ability to produce regularly before a top level club will be tempted to sign him.

Toffees boss Ronald Koeman said this week that Barkley, 23, is looking for ‘a new challenge’ as his future on Merseyside hangs in the balance.

Tottenham are reportedly keen on taking Barkley to White Hart Lane but Osman is not sure he merits that sort of move right now.

“He is certainly going to get into top teams in the league,” said Osman.

“But he’s not got the all-round game yet that managers of these top four or six clubs want to see.

“Moments of brilliance he shows are what clubs strive for. That’s why he’s constantly linked with top clubs. Not every player can produce those moments.”

According to Osman, Barkley’s apparent decision to make a move away from Everton has come at a strange time, given Koeman has been busy in the transfer market strengthening his squad with a dozen new faces.

He says it is time the Dutchman began to plan for the new season without the England international.

“Ross Barkley has got a big decision to make,” Osman added.

“Now it’s up to Koeman to plan for time without him.

“He has to plan for the club to move forward and he’s been doing a good job so far.”