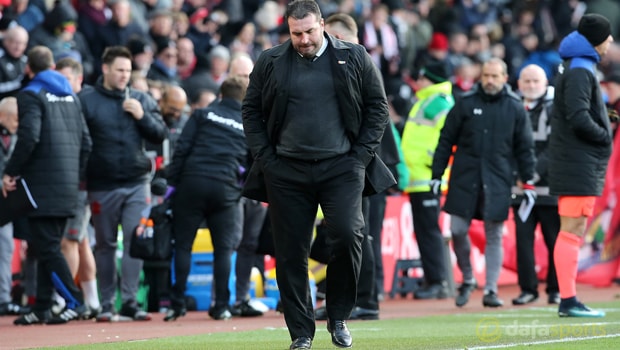 Everton caretaker manager David Unsworth believes it’s too early to say the club is involved in a relegation battle but admits they have a massive week ahead.

The Toffees find themselves sitting 16th in the Premier League after 13 games, having won just three times, and just two points above the bottom three after Sunday’s loss to Southampton.

Everton have won just one of their last seven Premier League engagements and the club is in desperate need of a permanent manager.

Ronald Koeman was sacked following the 5-2 loss to Arsenal on October 22 and Unsworth has remained at the helm during the interim period.

Southampton piled further misery on the Merseyside outfit at St Mary’s on Sunday as they ran out 4-1 winners, just days after Everton had lost 5-1 at home to Atalanta in the Europa League.

Unsworth is refusing to accept that Everton are in a relegation dogfight so soon into the campaign, however, he insists that this week is massive as they host West Ham on Wednesday and Huddersfield on Saturday.

“I wouldn’t go that far so early,” Unsworth said.

“We are in a tough moment, we have a massive week ahead. If you ask me that question next week I can give you a more honest view.”

Unsworth has struggled to address the problems within the Everton squad and he admits that it has taken its toll.

He added: “It’s killing me. “I take responsibility, but we all have to as well. The club has to decide and the sooner that happens the better.

“The players need this resolving. What I see is a happy squad but I’d rather have an unhappy squad that’s winning.”

Everton are priced at 2.30 to get back to winning ways on Wednesday, while West Ham can be backed at 3.20 to claim all three points, and the draw is available at 3.30.