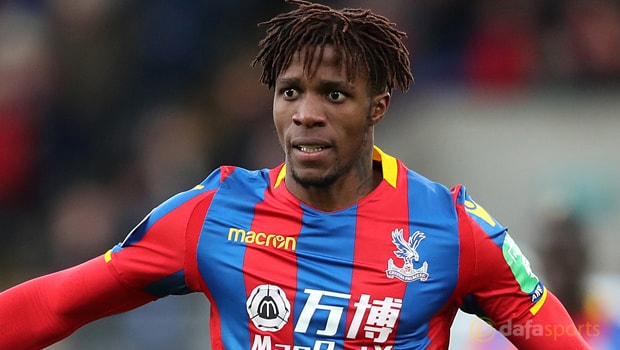 Crystal Palace boss Roy Hodgson has revealed Wilfried Zaha is ahead of schedule on his recovery from injury, although he will not be fit for Monday’s clash with Manchester United.

The Eagles have been beset by injuries throughout the season, but it is perhaps the absence of Ivory Coast international Zaha that is their biggest concern, as they have lost their last 10 Premier League matches when he has been unavailable – a run that stretches back to September 2016.

The 25-year-old’s current absence is down to a knee ligament injury he picked up against Newcastle at the start of February and he has subsequently missed their defeats to Everton and Tottenham.

Those losses have seen Palace slip back towards the relegation zone, but Hodgson has now revealed Zaha is ahead of schedule in terms of his return to full fitness, although the winger is still some way from making a first-team return.

“Wilfried is recovering ahead of schedule,” Hodgson told a news conference.

“But his running at the moment is pretty much in straight lines but we haven’t done those difficult things that need testing out for knee ligament injuries, the twisting and turning and then of course the contact with other players when you get back into normal training.”

Zaha will definitely miss Monday’s clash with United at Selhurst Park, although Hodgson is hopeful his injury-list is getting shorter, as Jeffrey Schlupp and Martin Kelly are scheduled to return.

“I said last time that Jeffrey Schlupp and Martin Kelly were close to returning to full training,” the former England manager added.

“I am counting on those two being fit, but they are the only two that are back in contention.”

Palace are priced at 6.50 to secure all three points against United, who are available at 1.57, while the draw is on offer at 4.20.