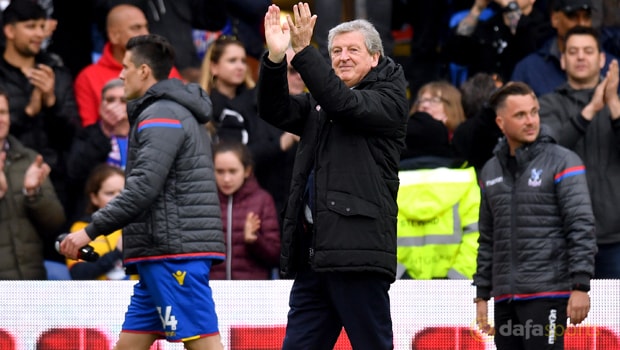 Roy Hodgson won’t be tempting fate by claiming that Crystal Palace are safe in the Premier League for another season, but he knows they are now all but there.

The Eagles thumped ten-man Leicester City 5-0 at Selhurst Park on Saturday and are up to 11th place in the table with 38 points.

Their goal difference is significantly better than many of the teams behind him and Palace are six points ahead of Southampton in the final relegation spot.

They may not be mathematically safe, but Hodgson feels his team are almost there.

“No-one wants to tempt fate too much in that respect, but it would take a lot for a team with 38 points and such a good goal difference as we have to go down,” he said.

“If we survive, which I believe we will, it’s going to be a very heart-warming occasion for everybody.

“In some way we did expect to get that last win and secure our status, so it’s more a relief than celebration.”

Goals from Wilfried Zaha and James McArthur had Palace in control by the interval. Mark Albrighton was then sent off before the hour for the Foxes, who appear to be on summer holiday mode with just four wins in 18 games.

Ruben Loftus-Cheek, Patrick van Aanholt and Christian Benteke all scored inside the final ten minutes as Leicester collapsed. It was a timely win for Hodgson.

“It certainly couldn’t have come at a better time,” Hodgson said. “It was a really important game for us.

“It’s all very well thinking you need one win from the last three games to secure your status, but you have got to get that win.”

Palace are 2.80 to win their next game at relegation-threatened Stoke. The Potters are 2.50 while the draw is 3.50.