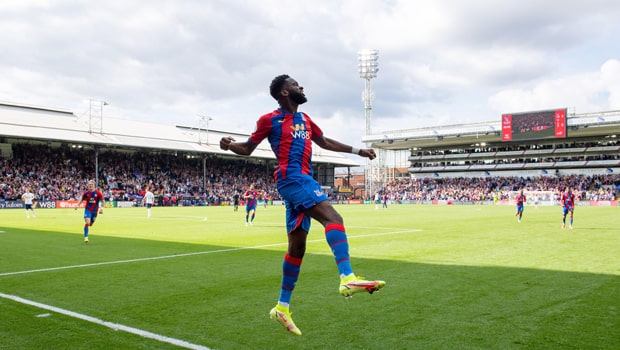 Patrick Vieira led Crystal Palace to his first three points as manager as Tottenham’s perfect start to the season was finally put to an end, 3-0, against a 10-man Tottenham side.

Tottenham fell down to 10 men when defender Japhet Tanganga earned a second card after a tackle on Jordan Ayew.

The Spurs came in with a perfect record after defeating Watford, Wolverhampton, and Manchester City in the first three weeks.

Palace manager, Patrick Vieira, who has never lost to Tottenham as a player or a manager, praised his club for a ‘good team performance.’

Palace fans were singing “Patrick Vieira, he’s won more than you” throughout the second half of the match.

Striker Édouard made his debut, scoring less than a minute after entering the match in the second half. He finished with two goals, with Wilfried Zaha netting the other one.

He had five touches, 2 shots, 2 goals in just 10 minutes of action.

“I’m very happy about my debut,” Édouard said. “It was a dream for me.”

Edouard becomes the first player to score two or more goals on a Premier League debut for Crystal Palace, and the first to do so for any club since Steve Mounie for Huddersfield in 2017.

“Big win for the team,” Édouard said after the match on social media. “So proud to make my debut at home in front of the fans! Thank you for your all your support.”

Tottenham was without Son after he suffered a calf injury; Lucas Moura replaced him in the lineup.

Palace dominated possession 63-37, and had six more corners than did Tottenham. Fans, and media alike were impressed with the efforts from Palace’s Connor Gallagher who is still just 21 years old.

In two matches for Palace so far, Gallagher has two goals and two assists.

He had two goals against West Ham, and two assists vs Tottenham.

He’s getting all the playing time that Chelsea would hope, and will more than likely remain on Thomas Tuchel’s radar.

Palace are back in action on Saturday, 18 September vs Liverpool, while Tottenham will look to get back on track vs Chelsea on 19 September.