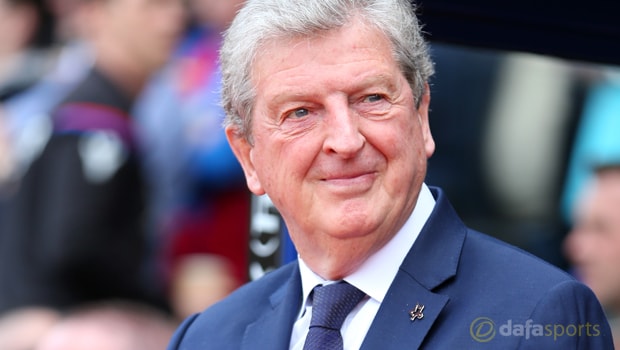 Benteke has endured a tough time since joining the Eagles from Liverpool in the summer of 2016 for a fee of £27million.

The Belgium international boasts just two Premier League goals in 2017-18 and has been heavily criticised by some sections of the Palace fans.

However, he has contributed with his all round performance during the second half of the season, which appears to have convinced Hodgson that he will be a key figure moving forward.

Reports have linked the frontman with a summer exit from Selhurst Park but Hodgson insists that hasn’t been discussed by the club’s hierarchy.

Hodgson said: “There’s been no discussions [about selling Benteke].

“Christian has a contract with the club. We’re hoping he’ll find the form he showed in the last period, between January and the summer.

“He’s left it late but we still hope he’ll find that form and and play an important part in us staying up. There’s been no discussions in the club about Benteke leaving.” Meanwhile, Zaha has undoubtedly been Palace’s most crucial asset this term, netting seven league goals, and his performances have led to interest from Tottenham and Arsenal.

Hodgson claims Palace, who are priced at 21.00 to be relegated, will do all they can to keep him in place for 2018-19 as they look to enjoy a more successful campaign.

He added: “[Zaha is] such an important player for Crystal Palace. He’s Palace through and through.

He’s basically a player we regard as our own — the fans certainly could sing he’s one of their own — so we’d like to keep him. “Transfer speculation will always be rife.

There’ll always be suggestions that this or that player is on the move. We don’t think about that. Wilf shows no signs of any thoughts other than helping his club get through the next four games to still be in the Premier League next season.”